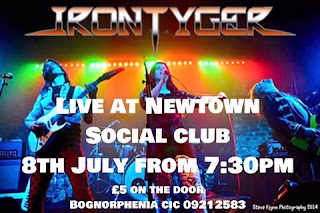 Posted by Bognorphenia at 23:09 No comments:

Bognorphenia celebrate past present and future of music all genres. Time for 80 s Rock Iron Tyger Will rock you 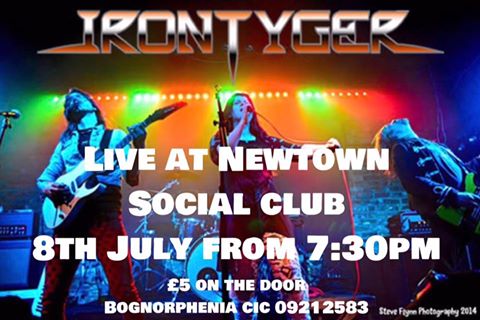 Posted by Bognorphenia at 23:04 No comments: 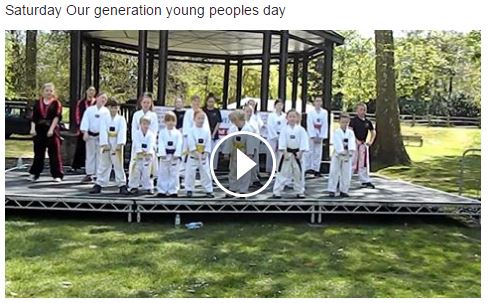 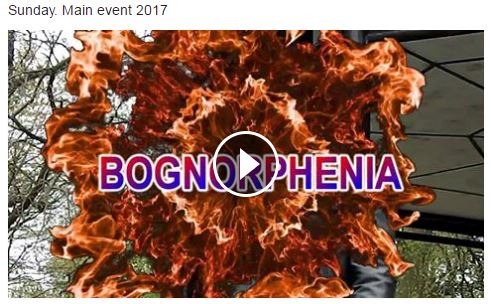 Posted by John Parsons at 11:36 No comments:

Lovely article by Laura from the Observer

‘A bit of a roller coaster’, that is how the organiser summed up planning this weekend’s Our Generation Young People’s Day.

The event, which will be held in Hotham Park from 10am to 6pm on Saturday, in association with Bognorphenia, which follows on Sunday, has been a while in the making.

“I have been fighting to get this up and running for two years,” said Kez Bridger. “It is all about the youngsters.”   In fact it is about them and by them, with Kez’s team including 15-year-old volunteers co-ordinator Peter Reavey and official photographer JD Fitzpatrick, aged ten.

“It is about them getting hands-on experience,” said Kez. “Hopefully we can build on it each year.

“I visualise it being about Bognor Regis and they can take ownership of it.

“It has been a bit of a rollercoaster and at one point we weren’t sure it was going to happen but I was determined and we got some funding from the councils, about £2.2k, which has helped us.

”One of the biggest hurdles is also one of Kez’s biggest motivations. “It is hard because there aren’t enough facilities for young people and this is a proven point.

We didn’t want them to come and then it be over – we are hoping to work with them for years.”

Saturday will also be the deadline for the junior category of the Bognor Trust’s photographic competition. Winners, and runners-up, for the adult category will be announced today with a special spread in tomorrow’s Observer.

To find out more about the event search ‘Bognorphenia’ on Facebook. The youth day is free but donations welcome. For more on the photographic competition search Bognor Regis Trust on Facebook.Read more at: http://www.bognor.co.uk/news/bognor-set-to-celebrate-day-for-young-people-1-7933639
Posted by John Parsons at 01:37 No comments:

From our German Correspondent...

Bognor Regis is a child-friendly city

FROM THE PARTNERSHIP: A club offers events for young people / This week's music and a photo competition.

www.badische-zeitung.de
WEIL AM RHEIN (BZ). Bognorphenia has a simple motto: "We love Bognor Regis". Jim Clevett, in his latest letter from Bognor Regis, describes what can be the result of this confession.
Dear Friends in Weil,
About the amazing club "Bognorphenia" I had already reported. Its members love Bognor Regis, want to look after young people and many great events in the city and collect donations for aid projects. And they do so too. This weekend, for example, the "Our Generation Young People's Day," which started live concert at the Waverley Pub last night, and today presents live music and comedians from 10 am to 6 pm at Hotham Park on a stage. In the evenings, the club club continues with a DJ party. Bognorphenia wants to attract young people not only as an audience but also as co-organizers. And so many young and young people had followed the call and made this event a great event.

Coordinator was the 15 year old Peter Reavey, official photographer becomes the ten year old JD Fitzpatrick. Kez Bridger hopes that the experience will be enough to repeat the festival every year. After all, the project was funded by € 2 200 from the town council. Kez calls the project a huge challenge. But the idea is based on continuity. "We wanted the young people not for a project, but for a long-time proven goal." The citizens' foundation of Bognor has chosen a photo prize. The adult category has already found its winners, the junior category will be announced today in Hotham Park.
After hundreds of inputs, it became clear that especially the sea, the beach, the perception of the weather moods attracted the photographers. The winner was Mateusz Kuzminski, who shot the "Bandstand", a music pavilion on the beach, at sunset. A bicycle on the pebbly beach inspired the second, Jeffrey Ballard, while the third, Andrzej Sroda, took a shot of the pier.
The operator of the Picturedrom cinema, which wants to accommodate modern technology in the listed building, is also promoted. After disputes in the municipal council, the majority opted for additional funding, as the costs are higher than planned.
The theater evening of the "Regis School" with dance, theater and music, which was initiated by a great film by Tim Hills, in which all the events, art projects or demonstrations of the school were compiled in an inspiring film, showed how creative young people can be . The next project is under the title "School of Rock" in July.
Posted by John Parsons at 01:09 1 comment:


Posted by Bognorphenia at 09:37 No comments:

I am absolutely blown away with everyone who supported this weekend and i am very grateful to every single one of you who attended, performed,volunteered, funders,traders you are my gifts.

A huge thank you to LIL DUDE PHOTOGRAPY for doing a great job as official photographer you should be proud little man.
Photo will follow of 10 yr old JD work.

Thank you to all those who braved the weather at the Bognorphenia Day of Life at Hotham Park yesterday (and the Young Generation Day on Saturday).
We had a great time and were entertained by a fantastic display of creative talent and exuberance.

With special thanks to all our guests and supporters including: 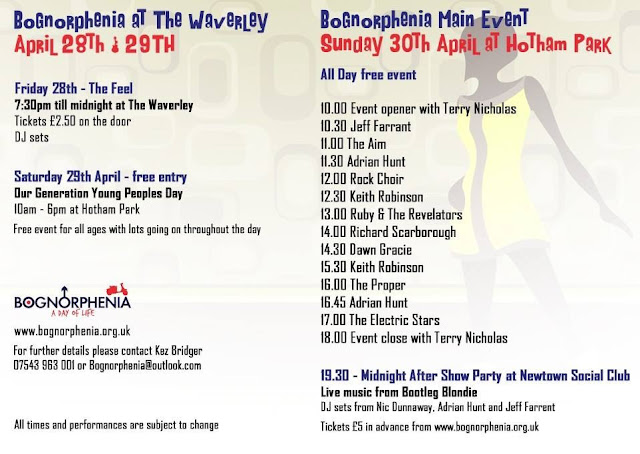 and to special guest Mayor Pat Dillon
and a special Big Up Bognor to Terry Carvey for standing in for Ruby at short notice.  Get well soon Ruby.
Kez and the crew x

Posted by John Parsons at 06:43 No comments: